Everybody wants to know your date of birth. The doctor, the pharmacist, the DMV, even the nail salon. It’s become the go-to method of confirming your identity. I was born on December 31st — New Years Eve. “Oh!”, they exclaim with a big smile. “What a fun birthday!” “Yes”, I reply with a fake smile on my face hoping it’s the end of the discussion. Sometimes people will continue, “You’ve probably had some really great birthdays.” They pause, waiting for a story.

No, actually, I got nothin’ for you.

My mother always did her best to make my birthday special. However, she’s my mom. Not exactly queen of the partyers (sp?). I really can’t remember one childhood birthday. Sorry, Mom, it’s not your fault. It’s just how things were done back then. 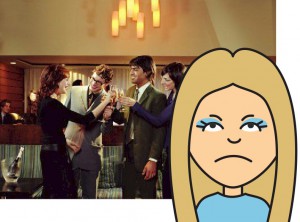 The first birthday I remember was my 14th. The parent’s of one of my best friends, Joan, were having a house party. Joan was allowed to invite a few friends. I was so excited! It was my first house party. I remember I wore sky-blue bell-bottomed hip-huggers and a matching sky-blue shirt with a flamingo and a palm tree on it. (Don’t ask.) I also wore matching sky blue eye shadow (Don’t ask about that either.) I was so excited! It was my birthday! I was allowed to wear make up! I had a great outfit! Surely, this would be the best night of my life! It wasn’t. There was no cake, no presents. No one even acknowledged my birthday. It was New Year’s Eve!

I don’t remember my sixteenth birthday. Believe it or not, there was no such thing back then as Sweet Sixteen parties or cruises. Yes, we had to endure the year without the fanfare that is expected today.

I do remember my 17th birthday. It was the year Saturday Night Fever came out. It was the one year disco was cool. (Don’t bother with the math, I’m 58) I abandoned my usual Levi jeans and Neal Young eight track for a sea foam green knee length dress and a Bee Gees cassette. I’m sure I was wearing sea foam green eye shadow too. I went with a group of friends to OBI North. We tried really hard to get into the pulsing music and disco ball. We may even have danced. We drank Blue Whales and Sloe Gin Fizzes. Of course, there was no cake. No presents. The DJ did not wish me a happy birthday. It was New Year’s Eve!

I drove everyone home in my 1965 VW beetle then headed for home. Imagine my surprise when I approached my house and the street was lined with kids. Apparently, my younger brother was hosting a New Year’s Eve party. Did I know about this? Why wasn’t I invited? Where were my parents? I think I found them huddled in the downstairs bedroom pretending their house was not full of drunk 15-year-olds. That night will go down in history has the night my parents met their (first) future daughter-in-law. She was barfing on the front porch. It was New Year’s Eve!*

Now, that’s a good New Year’s Eve story but it’s not my story.

The next birthday I remember I was turning 23. The previous summer, I had moved into a little bungalow with my boyfriend, Jim. Right away, we started having parties. Not the planned invitation-kind-of-parties but the impromptu “remember-the-night” kind of parties. This was my chance. I would throw the coolest New Year’s Eve birthday party. The kind of party people would talk about for years. I wore a grey and mauve striped jump suit with big padded shoulders and mauve eye shadow. My hair was freshly permed. I was really cute, really fun and had lots of friends. Our little house was packed. They tell me it was a great party. I don’t remember it. (We’ll skip the details because my daughters and mother will read this.) I’m pretty sure there was no cake or presents. I don’t think anyone wished me a happy birthday.  It was New Year’s Eve!

Four years later I married Jim. We had a baby. We started a business. Birthdays schmirthdays.

The next memorable birthday was my 50th. I didn’t really want to dwell on turning 50 but I didn’t want to be mad at my husband for not marking the occasion with something special. So I planned a Caribbean cruise for us and our two daughters. On New Year’s eve I wore a black pantsuit and too much black mascara. We had unflattering tacky photos taken and paid too much for terrible 8×10 prints. My husband gave me a nice ring and he made arrangements to have a cake delivered to our table. The waiters sang the birthday song in broken English with big smiles. They presented me with a cake. Written in icing, the cake said “Happy 60th Birthday”.

Apparently, there had been a language issue when he ordered the cake. I looked down at it and told the grinning waiters I was not 60. I was 50. They nodded and smiled and went back to serving other patrons. It was New Year’s Eve!

My husband started to chuckled, then my daughters. It really was kinda funny. We laughed until tears stared rolling down our faces. I finally had a good birthday story to tell.

Last year I decided that I was no longer celebrating my birthday on New Year’s Eve. To make it official, I went on Facebook and changed the date to August 10th. On Dec. 31st Jim and I stayed home, watched the ball drop and talked about all the idiots in Time Square.

It was New Year’s Eve!

*For those of you under 40 it probably seems like my parents were irresponsible. In reality, we probably had one of the more conservative families in the neighborhood. In this alternative universe 17-year-olds drove home after a night of clubbing (without wearing seat belts.) Parents did not hover around their teenagers monitoring their behavior. When things went wrong, you didn’t go to counseling. You just buried it somewhere deep and didn’t talk about it. And sometimes things did go wrong. Sometimes things went very wrong.

It’s different today. We do what we can to keep our kids safe. But things still go wrong. Sometimes they go very wrong. So maybe it’s not really that much different.