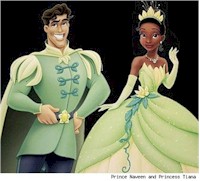 I hear the rumblings. African-American women are upset. They finally get a black princess and she spends most of her time as a frog. To make the situation even worse, she ends up with a white prince.

I get it. Really I do. But come on ladies. The more important question? Does she have a mother? A dead mother? Does the mother die during the movie? Or is she simply non-existant? I haven’t seen the movie but I’m just *dieing* to know.

The last movie I took my daughter to see was Finding Nemo. I think she was nine at the time. Not only does the mother die on screen but there was some sort of brutal attack by a gang of killer fish. My daughter is scarred for life. She has never been to the movies since. Oh sure, she says its because she hates sitting still for so long but I know the truth. The image of that dead mother fish is burned into her brain. Being in the movie theater brings back the traumatic feelings.

Does anyone know if this new movie is safe for sensitive teens?

We didn’t see Little Mermaid 3 but I understand they go back in time just so we can find about the brutal crushing death of Ariel’s mother.

And Bambi? Was that movie really rated G? Rugrats is rated PG because there are poop jokes. Really? Poop jokes need parental guidance?

5 thoughts on “The New Princess Movie”